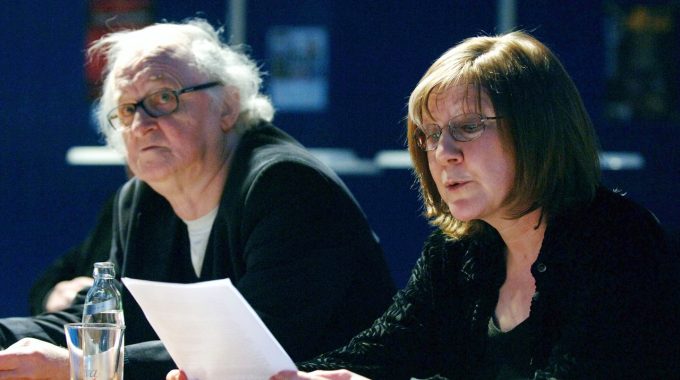 “Merci, Mikis” was what Theodorakis wrote in the guest book at the launching of the International Mikis Theodorakis Foundation (“Filiki”) at Bourglinster Castle on 1st July 1983. He had glanced through the other entries – all variations on a theme of thank you – written the two words and signed with his cardiogram signature. When we started to laugh, he turned to us with his quizzical grin: “Everyone else thanked me, so I thought I should too.”

“Thank you, Mikis”: words I’ve found myself saying or thinking over and over again since the composer first arrived in my life thirty-one years ago, in Paris.

I had taken refuge in the home of my Swiss friend Anna K. and one afternoon idly picked up a red and yellow LP. A few minutes later I found myself listening with thumping heart and lifting spirits to a soaring soprano of such majestic power it seemed to draw the choir and orchestra along in its wake, a proud ship carving through a sea of sound.

It was Canto General. All Mikis fans have had their “coup de foudre” for his music: this was mine.

The nomadic life I led in those days meant I had no records and music was often out of reach: Mikis’ music had put down roots, but the tree could not yet grow. Then a few years later, my life suddenly veered onto a completely new path and I found myself working in Luxembourg. And here I met G., who did not merely own the red and yellow LP but was writing a book about Mikis.

And so it was that eight years after hearing the Canto, I was back in Paris and G. was introducing me to the giant with his lion’s mane of black curls.

Mikis talked about his latest work Cheretismi. He played it to us and listened leaning back, with pursed mouth and closed eyes, right hand tapping time on the arm of his chair.

This was the man himself, the composer of the Canto, of the music for Z, the film that had so shaken us as students taking a break between two rehearsals for Henry V, and for that hymn to survival, Zorba the Greek…

I had entered a secret garden where you breathed bright air.

The light of irony filled Mikis’ eyes when I told him I was English. “Ah, votre Monsieur Churchill” was all he said. But the ironic smile continued to hover ghostlike over the history books in which I was to discover unpalatable truths about the British occupation of Greece, the beloved country for which Mikis had suffered imprisonment, torture, banishment and exile.

Even today, when the old lion takes my arm, he smiles that same smile, saying: “Avec la Grande-Bretagne, je me sens plus en sécurité!“

Mikis has lived in history and history lives in Mikis. Knowing him is to be forced to confront the truth, the reality of past and present. Knowing him is to constantly have before you an exemplary citizen’s life: a life spent, sacrificed if necessary, in the expression and defence of the common cause, of one’s own beliefs – without questioning, without compromise, with the natural courage that is unaware of itself.

His is a life of personal integrity that inspires… and challenges.

Self-respect will not let you duck the challenge. Neither can you dismiss Mikis as a superhuman being, capable of exploits beyond the power of us mere mortals.

He shows us he is as vulnerable, as human, as we are…

East Berlin: Mikis attending the première of his Third Symphony, confined by phlebitis to a wheelchair.

Vrachati: Mikis making a laughing fuss of his dogs bounding joyously around him, or driving out to sea at the helm of his dinghy, revelling in the wind, the spray, the speed.

Paris: Mikis bowing from the podium after a concert, eyes gentle with a smile of simple happiness. This giant standing before us, the lion’s mane greying, who has endured the near unendurable, has been, almost literally, through hell, has finally achieved that most natural of human destinies: he has become a grandfather.

Mikis’ example is always there to keep us up to moral scratch – and to give us courage in difficult times.

In my memory is a picture-album with a thousand moments of Mikis, captured and stored: the private man with his friends, the public figure, surrounded by the great and the good…

… And the artist. Many images show Theodorakis, standing black-clad on the podium, back towards us, the long arms outstretched, conjuring those irresistible sounds out of his musicians.

Mikis is above all a cosmic force, a grand architect of musical creation.

He has built us a musical house of many mansions: oratorios and operas, overwhelming in the complexity of their colours, their power of expression; music for theatre, ballet and film: Electra’s grief, played out for ever on the strings of the santouri; symphonies that astonish by mixing traditional modes with western forms; chamber music, intense, richly-scored, bold: hearing it you wonder where Mikis would be now, had that path been his…

And of course the songs – the classical cycles scored for symphony orchestra, the songs that give voice to the people’s struggle, sung to popular instruments, the intricate intimate lieder; songs of a near unbearable melodic beauty, songs that shock by telling of night horrors in the bright rhythms and colours of day; songs that are woven into the aural fabric of your being, are as familiar as your own breathing; songs whose existence seems as inevitable as the air.

Two little words cannot do justice to everything Mikis has given us, but they’ll have to suffice.